How to Lose By Landslide

And Fail Education At the Same Time

January 12, 2015
In any kind of writing, any kind of communication really, there are unbreakable rules. No, the police won't come arrest you for breaking them, and your 6th-grade English teacher isn't going to fly out of the closet with a red marker. What will happen, in fact, is nothing. Not a damn thing will happen. The reader will simply quit reading, and walk away. The failure to connect will be so strong, they may not return.

I've said before that I'm not a Democrat or a Republican. Like a growing number of people in the US, I've turned my back on party, and have taken up the responsibility of voting for who I believe will do the best job. Research isn't as difficult as it was a decade back. There are websites with stockpiles of organized, deep information on every candidate, their history, where they have voted before -- were their actions in line with their voters desires? -- which is what I look at most -- and just about every other dynamic you can think of. But trust me when I say,  ignoring the basics is fatal and taints the entire party.

I was fairly busy during Sept and October so I missed this "campaign". I was confused in November that the Republicans took so much. I asked myself many times, How does a party with 9% approval rate take 94% of the election? How does that happen?

Today I came across the answer.


These two posters are the perfect example of what NOT to do if you are a political party who wants to win at the poles.

First poster, "Roughly"... no. Roughly is not clear. It is not quantitative, it is not something you make decisions on. Roughly is a guess that you use when you are trying to figure out something personal, which doesn't have any consequences if you get it wrong. Roughly-- is a wuss word.

... let's interrupt for a moment here and recall that Education was a hot bed topic in October and September. There were several issues tied up inside that single heading. We had the StandUP Kids in Colorado, The Mixture of Religion with Schools, the AP History, charter schools and Common Core. These were strong and in-your-face issues. Americans were focused on these -- because they weren't just issues, they were THE issues. In the arena of the Activists, I was on the front lines, firing across the internet fourteen to seventeen hours a day. It was pitch battles too. The level of play was weaponized marketing and no quarter was given. Identify, destroy, move on. I really wish I would have seen these posters back then.

Just as a way of putting this into perspective...


As you can see, Education is THE issue of 2014. Are Americans actively interested in the pipeline? No. Are they actively interested in Immigration? No, even after Obama wrote his executive order, they are still not actively searching for information. Education tops their interest and the activity, searching and attention to this single issue has not wavered all year. Common Core, of all the separate bits and pieces that make up this huge issue of Education, are the words people are asking about most. In that heated battle, the Democratic party tells the voters that 2/3s of them (the voters) agree with traditionally Democratic positions -- And what exactly are those? Because what we have here are some NONtraditional issues, and that statement makes no sense at all within the context of that period, especially only a few days away from elections. In fact, it doesn't really make much sense now.

What Are the Traditional Democratic positions when it comes to Education?

No, that isn't a heading, it is a question. Because like most of America right now, we don't know what you think are Traditional Democratic positions. It sounds like -- and I know this is really silly and couldn't possibly be true -- but it sounds like you are saying that the Democratic party thinks that everything is just fine the way it is, and all we need to do, is put more money into the school systems and everything will be perfect.


The DPE poll also showed that roughly 2/3 of Americans agree with traditionally Democratic positions when it comes to education — especially when it comes to overwhelming support for neighborhood schools and teachers. Yet, unfortunately, too few candidates (either challengers or incumbents) talked up their support for public education last year. They failed to do so, even though this issue echoes both locally and nationally. Across the board, far too many folks ran on cookie-cutter platitudes. Or they hit their opponents in the abstract, rather than focusing on the issues that tangibly matter to their community. Candidates should have been talking up their support for public education and highlighting those instances in which their opponents snatched resources and funding away from neighborhood schools.

quoted from the most recent story on Democrats for Public Education Jan 15, 15

See... this is  how people get shot. Alright? What tangibly matters to those people, those parents is the fact that as of the last study 75% of 11th and 12th graders were not ready for first-year college courses. What matters to those parents is that the dropout rate is huge. That teachers were allowed to continue teaching even when they were not teaching! That things were so bad in schools, the quality so poor, that students sued the schools for failure to meet their obligations, and WON! Money doesn't fix the problems our schools are facing. Money just means that they will continue to do more nothing.

The Democratic Party, walked into the heated issues of 2014 and said "We don't know what is going on." and then tried to say that 2/3s of the voters were on the Democratic side. Well... guess what? You are absolutely wrong. 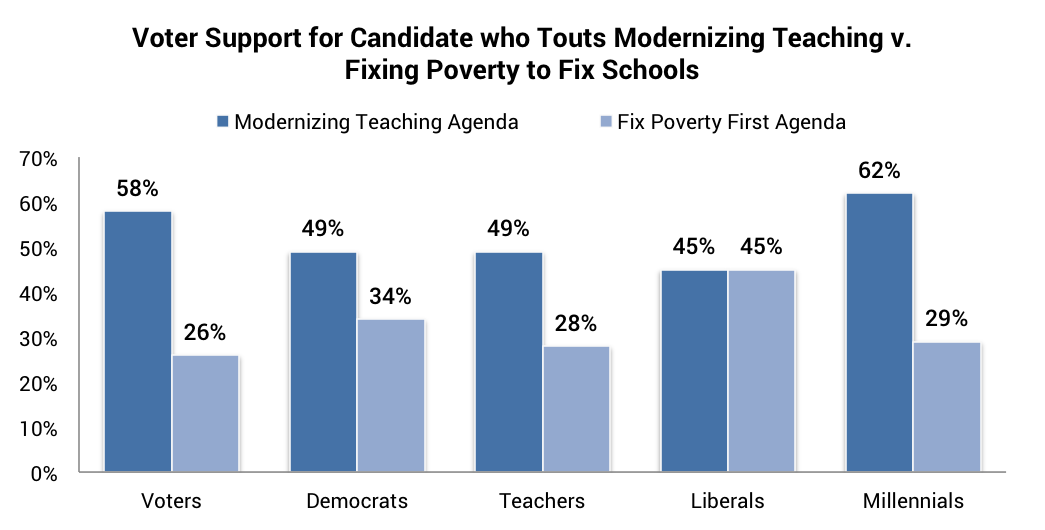 You are out of touch. Way out of touch, and your posters, which give no clarity, and no message - prove it. The last message on your website, proves that you still don't get it, or you just don't care. We do care.

On top of that, those posters have no call to action. You spout off a meaningless and inaccurate message, and then ...

That is how a party with a 9% approval rating receives a landslide win... because the other side didn't bother to show up.

Education is still the number one actively pursued issue in the United States. It used to be a Democrat issue. We use to give it to you on reflex. It was just a given that Democrats would take care of Education better than anyone else. By nearly 50 points this was true. Now... well... you better check the stats, because I'm not sure you are on top anymore. Last I checked it was down to 8 points.

You walked away from Education. You did not support the President. You failed to make stands, to support each other, and to push the "do nothing" members of congress. Maybe you couldn't have gotten them to "do something" ...but you damn sure could have tried. You still can.