If we're all in sales, as the old saying goes, then we're all in the persuasion business. And this is particularly true for entrepreneurs. Whether you're asking investors to hand over their money, potential customers to try your product, or employees to give their best, much of your day is probably spent persuading people. So how do you do it well?


Social proof, also known as informational social influence, is a psychological phenomenon where people assume the actions of others in an attempt to reflect correct behavior for a given situation. The effects of social influence can be seen in the tendency of large groups to conform to choices which may be either correct or mistaken, a phenomenon sometimes referred to as herd behavior.

Tipping point is a point in time when a group—or a large number of group members—rapidly and dramatically changes its behavior by widely adopting a previously rare practice.

The phrase was first used in sociology by Morton Grodzins when he adopted the phrase from physics where it referred to the adding a small amount of weight to a balanced object until the additional weight caused the object to suddenly and completely topple, or tip.

There are a million hints and tricks out there--some more practical than others. A little swearing might help, suggest some studies, or if that's not appropriate for a given situation, how about simply adding a because statement to your request?

Meanwhile,classic techniques like social proof, or convincing someone that everyone else is already doing whatever you're trying to get the person to do, or stressing scarcity are well known and frequently employed.

But for some reason, amid all this chatter about how to be more persuasive, one simple, practical, and well-tested technique had largely got lost in the shuffle.According to a recent post laying out the idea on PsyBlog, a whopping 42 studies with 22,000 participants have found the technique roughly doubles the chances of someone agreeing to a request.

What is it? Simply reminding people they're free. The blog calls it the But You Are Free technique, or BYAF for short:

This simple approach is all about reaffirming people's freedom to choose. When you ask someone to do something, you add on the sentiment that they are free to choose.

By reaffirming their freedom you are indirectly saying to them: I am not threatening your right to say no. You have a free choice… 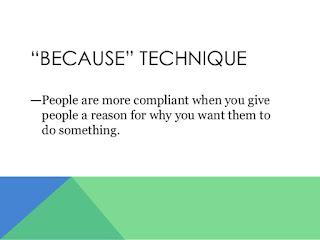 People have been shown to donate more to good causes, agree more readily to a survey and give more to someone asking for a bus fare home.

The exact words used are not especially important. The studies have shown that using the phrase "But obviously do not feel obliged" worked just as well as "but you are free."

What is important is that the request is made face-to-face: the power of the technique drops off otherwise. Even over email, though, it does still have an effect, although it is somewhat reduced. 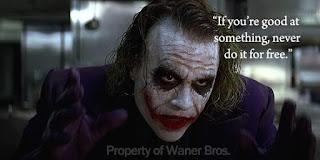