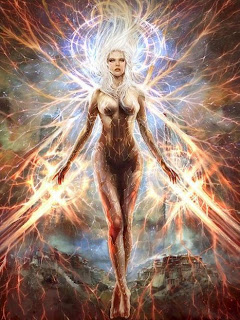 Do you remember who you are?   Do you recall your power?   You and I, We have created Gods. We have frozen oceans, filled jungles far and wide with beasts of great wisdom and immorality.   We have conjured suns, pulled moons from their orbits, and snapped the wires suspending Heaven, just to hear the enraged coiling as they spiral and whine across the sky.   We have bathed in moonlight and Consumed the Nectar of starshine -- then washed the world clean with rain. Do you remember?

On our off days we created kings, crowned their heads, then removed their heads with guillotine -- just as an exercise -- a proof of concept. And when the God we created became unworthy, we diminished his followers to madmen and extremists, then executed the God.

Did you forget Lilith? Ashera?... the poets of Sumer?


A chariot of pine-wood, a litter of box-wood.A bunch of fruits, a garland growing luxuriantly.A phial of ostrich shell, overflowing with perfumed oil.

Have you fallen so far that your powers are only dreams of  another era?. look around you, listen to the ether. We will be needed  to rebuild their myths, to set right their temples, and pull their humanity from the ash and skulls.. We are the wizards The story must not die...