The Bleeding Corpse: Your MC comes down the wooden stairway, that was old when he was born, and into the cellar of the house. He descends into musty smells, feeling layers of dust and dank as he submerges into the thick air. A single naked, low watt light-bulb hangs over the laundry area to the right, On the smooth cement floor inside that lonely pool of light lays the body of Mrs. Katt. Blood is dripping out of her eyes like tears...

Your character better rush to the phone and call Emergency help. Now! Go! Because Mrs. Katt is still alive! 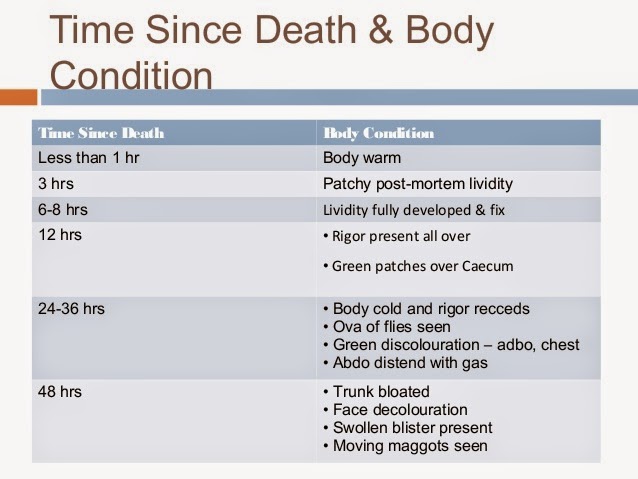 You might see dead people, but you don't see them bleed. When you die, your heart stops, and the blood no longer circulates -- so... no bleeding. Blood from the eyes and ears of the dead. None.

There are a few key stages after dead for a corpse. Your character may or may not know about these. Not many people have this in their Usage Memory, but you should at least understand the keywords and states.

Livor mortis is a settling of the blood in the lower (dependent) portion of the body, causing a purplish red discoloration of the skin. When the heart stops functioning and is no longer agitating the blood, heavy red blood cells sink through the serum by action of gravity.

Livor mortis is also called post-mortem staining, subcutaneous hypostasis, livor mortis, cadaveric lividity, suggillations, vibices and darkening of death. The intensity of the color depends upon the amount of reduced hemoglobin in the blood.

In cases of large amount of reduced hemoglobin before death, the blood has deep purplish-red color. It is caused by the stoppage of circulation, the stagnation of blood in blood vessels, and its tendency to sink by force of gravity. The blood tends to accumulate in the small vessels of the dependent parts. Filling of these vessels produces a bluish-purple color to the adjacent skin. The upper portions of the body drained of blood are pale. The color of the hypostasis may vary from area to area in the same body. 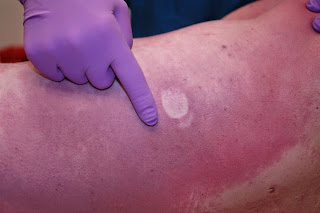 Livor mortis starts twenty minutes to three hours after death and is congealed in the capillaries in four to five hours. Maximum lividity occurs within 6–12 hours. The blood pools into the interstitial tissues of the body. The intensity of the color depends upon the amount of reduced hemoglobin in the blood. The discoloration does not occur in the areas of the body that are in contact with the ground or another object, in which capillaries are compressed. As the vessel walls become permeable due to decomposition, blood leaks through them and stains the tissue. This is the reason for fixation of hypostasis. 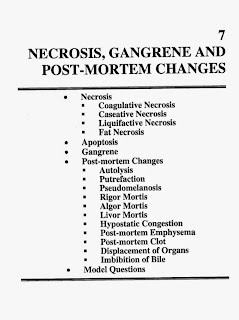 Coroners can use the presence or absence of livor mortis as a means of determining an approximate time of death.  It can also be used by forensic investigators to determine whether or not a body has been moved - for instance, if the body is found lying face down but the pooling is present on the deceased's back, investigators can conclude that the body was originally positioned face up. That bruising telling them this won't last long. It's not really bruising, it is just the pooling of the blood seen through the skin. Fifteen--twenty minutes, it won't be there.

Hypostatic congestion resembling post-mortem hypostasis may be seen a few hours before death in case of a person dying slowly with circulatory failure, e.g. cholera, typhus, tuberculosis, uramia, morphine poisoning, congestive cardiac failure, and asphyxia. In such cases, hypostasis will be marked shortly after death. it is intense in asphyxia, where the blood may not readily coagulate, and in death from hemorrhages, anemia and wasting diseases due to reduced amount of blood and pigment. It is also less marked in death from lobar pneumonia, and other conditions in which the blood coagulates quickly.

The hypostatic areas have distinct color in certain cases of poisoning, e.g.


In asphyxia, the colour of the stains is deeply bluish-violet or purple. In exposure to cold and refrigerated bodies the colour is pink, as the wet skin allows atmospheric oxygen to pass through, and also at low temperature haemoglobin has a greater affinity for oxygen. In septic abortion caused by Cl. Welchii the colour is often grayish-brown.