Me of the Sumerians; the Nam Shub of Enki

We never feel just one emotion. Emotions arise in blooms with cohorts. I mean, anger for example. We're never only angry. At first sight it might feel like we are, but another emotion colors the fury. We might also feel hurt, or betrayed, or belittled, or offended, or abused, lied to, or a pollen cloud of other emotions. We're angry for a reason. Emotions do not segregate. Positive and Negative emotions associate freely with each other inside the same causation. I can be in love with the same person I am angry at, or about. I may not wish to be alone, but wish to be left alone. These are not conflicting. They are not at odds. The contrast causes no schism. 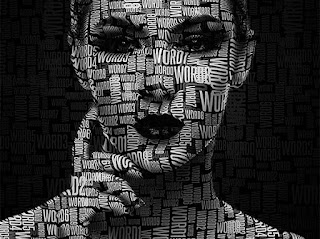 We also never have just one thought. We're not thinking a single thought, not ever -- if we did then the heart stops and death comes savagely. But even higher into our conscious awareness, as we speak, we are watching who we are addressing. We are measuring what has been said, against context. We're estimating, inferring, building, extrapolating coda outside our awareness, beyond what we know -- While we are judging our adversary, we also think these other things.

The oldest words the first of our words — "yes" and "no" — are those which require the most thought. My personal advice would be to never say Yes to something, or someone you don't believe you could say No to.

We listen to tones in voices and estimate by what words do to eyes.

So, we are never thinking one thing, and we are never feeling one emotion. We think in matrix and feel in tides. Experience is what you get when those two talk. Beyond thought, beyond awareness, or the memory of either. Experiences are metaphoric collections of living. Not of life, but of _living_.

In concert, experiences are commutable. An experience can be imparted to another, and through empathic transference another can undergo the fission or horripilate originally felt by the author.

A story which transfers knowledge and emotion as experience is a Me (may). 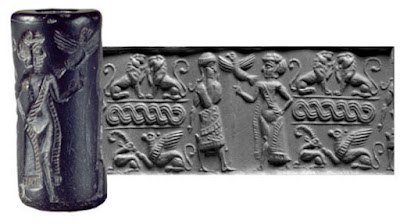 If you read a Me I wrote about how to write a novel, when you were finished you would have the experience of writing one. You will for all intents and purposes, have written one. You'll know and a have felt everything about the process I explained in the story. That was what Me meant. A Me does not only impart academic information but real life experience as well.

THE NAM SHUB OF ENKI 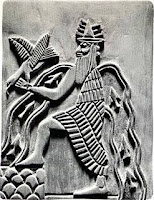 There was no wild dog, no wolf,

There was no fear, no terror,

Man had no rival.

In those days, the land Shubur-Hamazi,

Harmony-tongued Sumer, the great land of the me of prince ship,

Uri, the land having all that is appropriate,

The land Martu, resting in security,

The whole universe, the people well cared for,

To Enlil in one tongue gave speech.

Enki, the lord of abundance, whose commands are trustworthy,

The lord of wisdom, who scans the land,

The leader of the gods,

The lord of Eridu, endowed with wisdom,

Changed the speech in their mouths, put contention into it,

Into the speech of man that had been one.