Phrase/Word Trivia
Mad as a Hatter 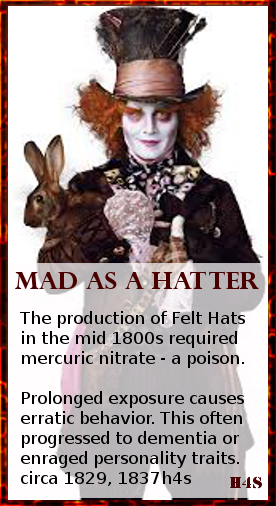 Have you any idea why
a raven is like a writing desk?

MAD AS A HATTER is from 1829 as "demented," 1837 as "enraged," according to a modern theory supposedly from erratic behavior caused by prolonged exposure to poison mercuric nitrate, used in making felt hats.


"Then you shouldn't talk," said the Hatter.”

Hatter: Have I gone mad?
Alice:   I'm afraid so. You're entirely bonkers. But I'll tell you a secret.
All the best people are.