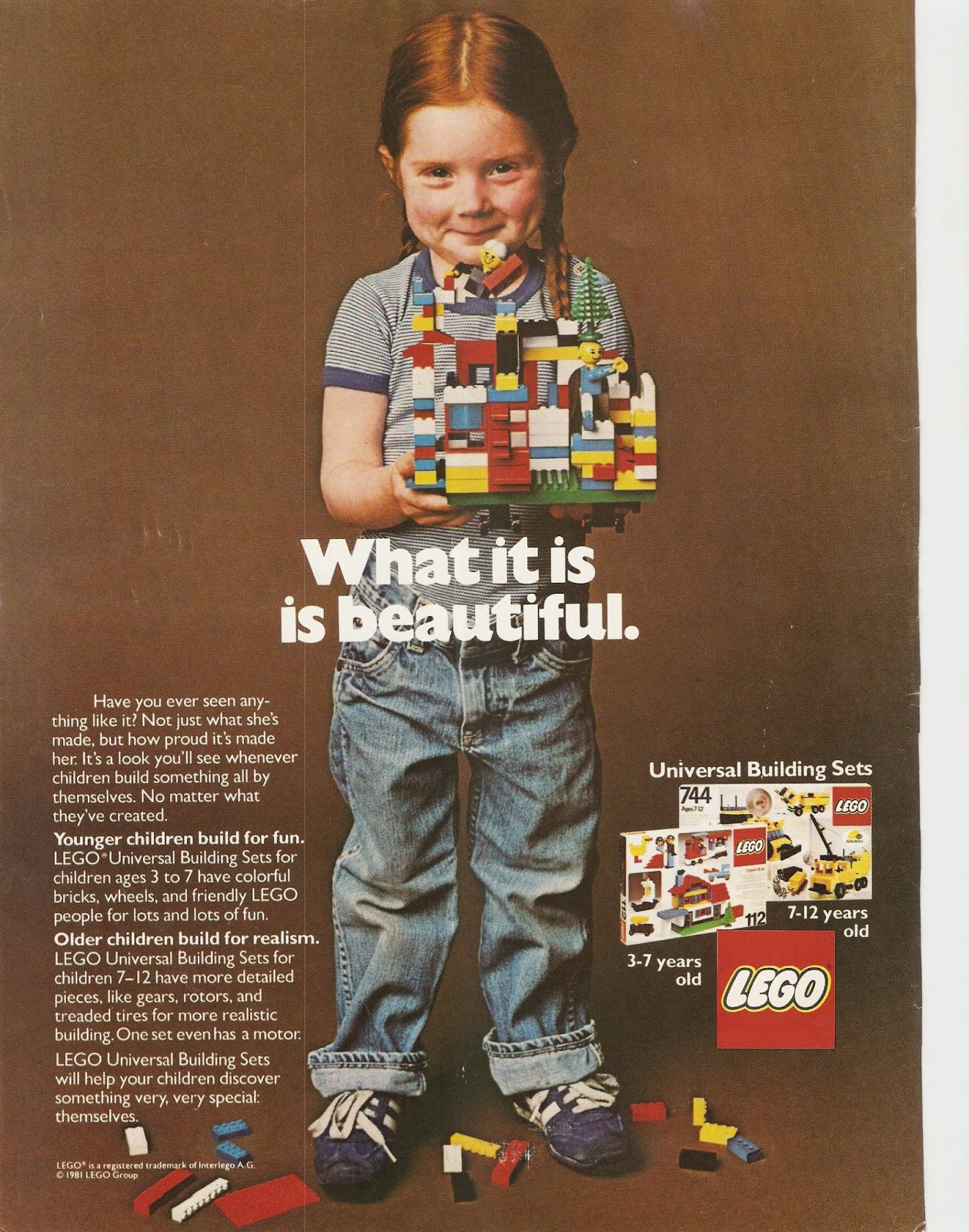 It was about 7AM when I saw the tweet. I was closing down my Twitter and Facebook to return to the seething build up that's going on -- and not looking forward to it this morning. My head ached, from lack of sleep, I was overly cranky -- for several related reasons -- and honestly I was in one of those, 'don't fu*&ing do it man' moods. Then I saw the tweet. A flash really as I closed down the Twitter. I caught two words, 'Nightmare' and 'LEGO'. I also recognized the source, so I knew the context. With a new click I brought the Twitter back up to find out what the full message was.

To be honest, I had already decided that I didn't like it, and that it was inline with several of the messages and campaigns I've been coming across. Reading the text I did exactly what I tell people never to do -- I didn't follow through or check the story. After the night I had and the sources I had read for the twelve hours before that -- I "knew" what was going on and responded in kind. Recognizing the sender account didn't help. It added an under tow of betrayal to the mix and just for future reference, that mix is never a good one to be making decisions on -- although I can't picture anyone not doing so -- there's nothing more stimulating to knee jerk response than justifiable anger. 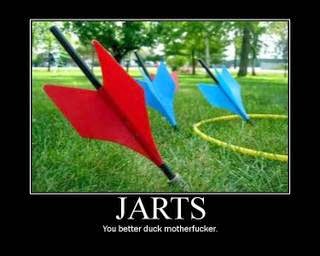 Two more relevant facts were in my mind as I reread the Tweet. One, is that LEGOs was practically the founder of non-gender specific marketing. They started this back in the late 70s. I recall it because my younger sister saw one of the ads and instantly wanted a full set of building blocks. At the time I wasn't that interested -- I had a new set of JARTS -- I still can't believe that my parents thought that what a seven year old needed was a set of iron javelins. It never crossed my mind at the time that building blocks were "boy toys" or rather NOT girl toys. What Sandra did with those blocks was amazing to me. I never could get them to become what was in my head, and she created whatever she wanted to create with an ease that was disturbing  to me. I could throw those JARTS though, so it was all good -- except for the neighbor's 1967 Corvette it was all good...

LEGO is also a Denmark company. Denmark is so close to closing the Gender Gap completely it boggles the mind. On top of that, the country ranks highly in numerous areas, including education, health care, protection of civil liberties, democratic governance, prosperity and human development. Their teachers make what their doctors make. Denmark is frequently ranked as one of the happiest countries in the world in cross-national studies of happiness (not kidding, they really do have a Happiness Study). The country ranks as having the world's highest social mobility, a high level of income equality, and has one of the world's highest per capita incomes. Workers at McDonald's, Burger King and other fast food chains make the equivalent of $20 an hour.

I don't -- by any means -- keep up with what toy companies are doing. I didn't hear about 'Friends' until last year, and then just the one article, which was listed under the one I was interested in -- that article announced that Lego had a new "Research Institute" collection featuring female scientists including a woman chemist, palaeontologist, and astronomer. The science-themed project was selected as the latest Lego Ideas winner, and was submitted by Dr Ellen Kooijman, a geochemist in Stockholm.The article was reporting that The Research Institute sold out within a week of its online release in August 2014.

So I missed 2011, 2012 and little Charlotte Benjamin's letter -- complaining about not being able to play with sharks...

The "Friends Club" added a huge profit jump to the Lego line. The word "Lego" in the Latin means "I put together" according to the Lego company. I have to take their word for it since my dictionary refers me to them as well.

If you go on the LEGO website, you can find this "LEGO Club" which is described as:


The LEGO Club is an entirely FREE-to-join club for LEGO fans ages 4-11 years. When your child wishes to join LEGO Club, you can allow them to subscribe to the free LEGO Club Magazine and access the safe & secure LEGO Club website. You can also receive the LEGO Club email newsletter, with the most up to date LEGO news and features.
Being a LEGO Club member lets a young LEGO fan become part of a world-wide community of talented, creative and incredibly imaginative fellow builders, all in a completely safe and secure way.

Lego: 1954, proprietary name (in use since 1934, according to the company), from than Danish phrase leg godt  "play well." The founder, Ole Kirk Christiansen, didn't realize until later that the word meant "I study" or "I put together" in Latin. ~ From Online Etymology Dictionary
So, from the mythos and rhetoric we have a company here that is dedicated to putting out toys that provide enough fodder for the imagination to build and create and learn in a safe way. The word "secure" is even used. What we also have is an epic fail.


Safe and Secure from what?

When I read that paragraph, as a grandfather I don't really think about Identity theft or phishing my granddaughter's credit card while she's logged in and playing with her friends. I think of pedophiles and predators. I think of men pretending to be kids, and gaining confidence. I think of my granddaughter being duped into sending pictures and giving out personal information.This could happen to my grandson as well. The current statistics suggest that 1 in 5 preteen girls will be sexually assaulted in some form -- and 1 in 20 preteen boys will be assaulted in such a manner. There is a growing problem with 'Flesh Trafficking' in the US. Germany reports the same issue -- though currently our Senators seem to feel about the same urgency as LEGO gives this situation. After all, what is my granddaughter being encouraged to share with her online friends on LEGO's Club?

I give LEGO no out on this one. I intend to be as harsh and pointed and vulgar as I can until they get the message that my granddaughter is not pedophile bait. That girls "ages 4-11" -- as described by the LEGO corporation in the quote above -- do not now, nor will they ever -- require Makeup Tips. There is no rational reason that a company should encourage children to be sexy and then go share online.

So, yes. Fricken Legos, and the Tweet this morning used exactly the right words ... as I should have known an author would.

Tweets From the Like-Minded 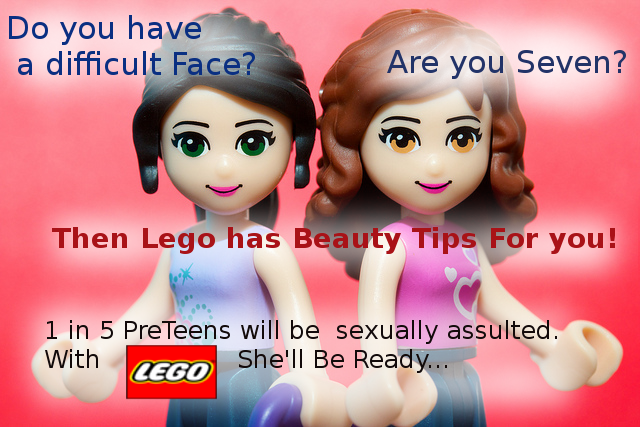