No End Planned for Ferguson Demonstrators 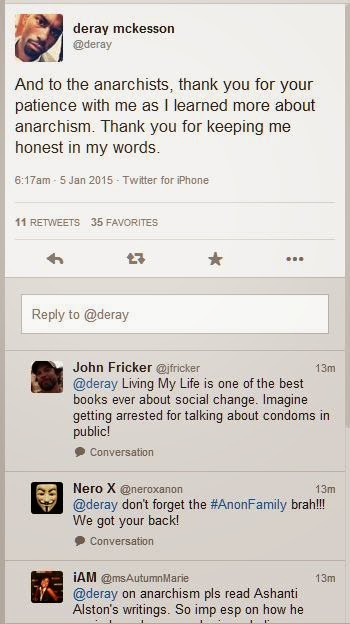 The man running the demonstrators in Ferguson -- or at least 16k+ of them is Deray McKesson @deray.

I was working with him to define goals and negotiations. It's been something like 150 days, and he's not even talking to anyone. So I opened a dialog to see if I could help. But I'm not black enough, or I don't understand... or that's what he was saying. Today he tells me the real reason is that he is an anarchist. He's not going to end it. He's just going to push it forward as far as he can.

Over the last week he has been collecting donations for financing to August. He's not going to stop... To Infinity and beyond...

Those people out there demonstrating think they are doing something for a reason... They're not. They're just meat on the street. He's even started sending phrases that start with "Blessed are those..."

If you have reporters you know... maybe  you could send this to them. Those people should at least be told who they are following, and why.