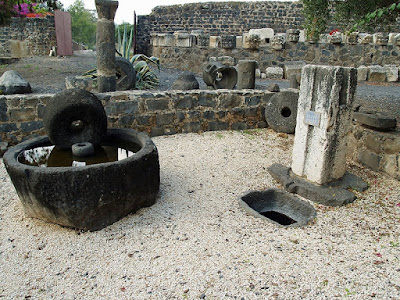 ﻿The bane of historical sections in fictional novels, is the writer of the fictional novel. Ideas and settings are hard enough to come up with, and when you get a good story line running in your head, the last thing you want is some archeologist coming up with a fact that makes your great idea impossible, or at the very least highly unlikely.

For example, I had a great mental image of Dismas coming down into the Valley of the Shadow, on the east side of Jerusalem. There is a necropolis on the Mount of Olives, just to the south of where he is riding down from the summit. To bring the description inline with the mood of the character, I wanted to darken the atmosphere up a bit, which is rather difficult considering you are looking at Jerusalem from the summit of the Mount of Olives at sunrise.

One of the descriptions I came up with, is to put some fog down in the bottom of the vale, and to put some small lamps on the tome stones in the fog covered area of the necropolis. Small lights in fog are spooky to me. There are names like death watches and dead lights that come to mind when I see these scenes. The trouble was I didn't know if the Jewish people put lamps on tome stones.

After doing some research on the Internet, I came across an article on Stephen Smuts' blog called Ancient Jewish Oil Lamps . In the article Stephen says:

Lamps are common finds in archaeological excavations of private dwellings, villages, as well as in tombs, and are helpful tools for dating.

I really like the word "tombs" in that sentence, because it offered the suggestion that having lamps around the dead would (at least), not be offensive to a Jewish reader. So I wrote Stephen and asked him if there was any Jewish custom he knew about which would put lamps on tome stones. He was very kind in taking time from his day in writing me back.

The answer of course is no, they didn't and don't do that. So in my "writers" mind, these lamps are being left by Roman or Greek friends of the dead, and since there are only a few lamps in the scene, and it isn't and offensive act (wouldn't be considered a desecration), I left the scene in the chapter, but I don't explain it or elude to it after.

Stephen also suggests in his article that the lamps are very useful for dating a discovery, and I take this to mean there are different types of lamps being created over time; different styles and possibly different materials being used as well.

The great temple lamp, the one inside the temple which burns before the door of the Holy center, can only be filled with olive oil. And... this olive oil is made from gathering the first drop of oil from each olive.

The towering lamps in the court yard in front of the temple are also filled with olive oil, and the wicks are said to be made from the old robes of the priests. How true this is, I don't know. There are many basic information areas that we have lost regarding the temple, which is the second bane when writing about ancient days. Some times the information you are looking for, simply doesn't exist.