Map of Alexandria I used for the first Forever Jack Novel 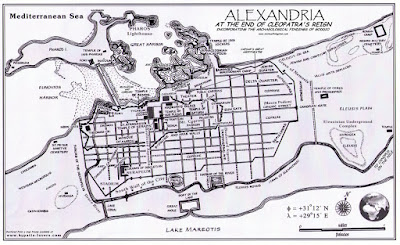 I found this map on Michael Livingston's web site. He did a bit of editing to the version he found. While most of my descriptions are going to be vague, especially concerning places that simply do not exist any longer, in order to write the passages, I need to know what they look like.

I guess it is quite a bit like the characters of a fiction novel. You note and create a much larger profile for them than you will ever use in the novel.

In the Gospel of Nicodemus, Dismas is said to have guarded the passage of Joseph and Mary, with their new child Jesus, into Egypt. This simple statement tells us a great deal about Dismas, and his character if we choose to use it, and I did choose, because there is so precious little to go on.

First off, Dismas is probably between the age of 16 and 20 when this happens. Any older, and he would be past 50 when they capture him as a thief for Crucifixion. Any younger, and he wouldn't have the clout to guard anyone, anywhere.

This also tells us that Dismas is a career thief. A highway man. And, probably from Egypt himself, though not necessarily an Egyptian. I choose to keep him simple, and left the nationality up to the reader to decide. The orphan history is assumed, since for the life he is leading at such a young age, he has to have the skills. To have those skills at 16, he had to grow up with him. Jumping from there to Dismas being an orphan on the streets of Alexandria, seemed almost apparent.

Michael Livingston had some issues with this map, suggesting that it wasn't accurate to where things were according to new information found in recent digs. You can read more about that on his web site. I needed very little from the map. The Jewish quarter, the location of gates, and the rough size of the city. Most of the rest I could manage without.