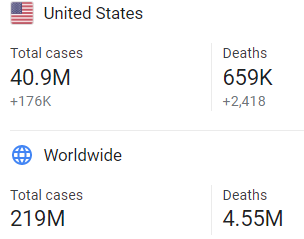 We are currently inside the grips of a pandemic that has been going on in the U.S. since January of 2020. Right now we are in the Delta phase, and heading toward a yet to be understood Mu phase.
Yesterday, ~500 people died in the state of Florida. The daily average is 350, a day. Not a week or a month. Every day.  These days most of them are young.
The governor of the state, DeSantis, has had a three month run of fighting just about every suggestion from the CDC, from the Whitehouse, from other states, and from his citizens. There is lots to read on that.
President Biden, also yesterday, said, enough was enough, and Mandated vaccines for large groups of people -- like anyone working for the government, anyone working for state governments, schools, healthcare and hospitals, truck drivers, and many more.
Biden waited to do this. He didn't want to take this step, but as you can see in the image below, not doing was no longer an option. He waited until the vaccine had been passed by the FDA. Then waited some more. Rattled his sword. Made stern faces. And then he went forward with the mandates. Which is the next indicated step according to the experts in these kinds of decisions.

“I can say the one thing that I’m concerned about is them trying to force mandates on individuals and businesses,” said DeSantis

DeSantis said this before Biden even announced it in the press conference. I guess Biden must have given the governors a heads up -- which was professional of him. The least they could have done was wait until he was finished speaking before condemning the plan.

“I just think that that’s fundamentally wrong, and I think that the more and more this has become coercive, where people have threatened mandates and firing and business consequences ... the more people it alienates,” he added.

Then he announced that he would sue, committed to stopping Biden, and called the mandate Unconstitutional.
Florida: New Infections

The Claim of Unconstitutional

This court has more than once recognized it as a fundamental principle that 'persons and property are subjected to all kinds of restraints and burdens in order to secure the general comfort, health, and prosperity of the state....
...
Upon the principle of self-defense, of paramount necessity, a community has the right to protect itself against an epidemic of disease which threatens the safety of its members.
...
But the liberty secured by the Constitution of the United States to every person within its jurisdiction does not import an absolute right in each person to be, at all times and in all circumstances, wholly freed from restraint.
SCOTUS
JACOBSON v. COM. OF MASSACHUSETTS

You might hear that the case of Jacobson was back in the days of Yore(1905), but that case has been reaffirmed over and over again for all kinds of variations, and was built on the top of solid cases as well:
Not everyone likes to hear from the Supreme Court -- especially when the rulings don't agree with their own desires, which is fine. There are other ways to demonstrate the foundation of the country.
Perhaps something from the Founding Fathers?

George Washington, commander-in-chief of the Continental Army, ordered mandatory inoculation for troops if they had not survived a smallpox infection earlier in life.
Source: National Library of Medicine

Jacobson, at the time was a more thoughtful ruling. There was another known as Lochner, which was later overturned and is beyond the scope of this post, which was more along the lines of "We're the Gov, just fricken do it,".
In Jacobson, the state compelled vaccination only indirectly—by imposing penalties, denying school admission, or quarantining. Basically, you could choose not to, but they would fine you, and then make your life miserable until you got the shot.
This way the courts could avoid ruling on the constitutionality of physically requiring vaccination, because this would be a ruling directly affecting a person’s control over his or her body. Not to say that Jacobson guaranteed, by that omission, that we had that control/right, because it did not -- but the soft-hands approach used by the state allowed the justices to skip past any messy areas. I've noticed over the years that they do that, quite a bit, and only recently have I understood why. 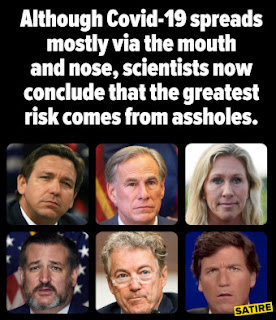 It took me about three hours to read a couple of web pages, and peruse the ruling and be able to at least understand the topic. And I'm positive that DeSantis, as well as all of the others, have Internet connection.
Later that same day, Florida Attorney General Ashley Moody tweeted that Biden “does not have the legal authority to force vaccines on millions of Americans’' and said her office would take “any and all action” possible to stop it". Now, I assumed that DeSantis didn't have a Law Degree, and like me would have to actually go look all of this stuff up. However, I'm positive that Ashley Moody has a degree in Law, right? I mean, she is the Attorney General of the state.
Why do we elect people who don't know the basics of government and Constitutional Law? I'm not asking that they should be Scholars, but ... President Biden's action has over 200 years of precedent. It is almost as legally solid as the law against murder. Doesn't anyone remember things like the Common Good? Right to Life? .. which is always listed before Liberty?
Today, every time I heard someone like a Governor, or a Congressman, Senator say that Biden's move is "Un-Constitutional," all I heard them say was: "I'm not qualified to Hold Office"
During the last several decades, the Supreme Court has recognized a constitutionally protected “liberty interest” in refusing unwanted medical treatment.
The Court accepted the principle of bodily integrity in cases that involved the rights of persons who had terminal illnesses and mental disabilities. Outside the context of reproductive freedoms, however, the Court has not viewed liberty interests in bodily integrity as “fundamental.”
Instead of heightened scrutiny, the Supreme Court balances a person’s liberty against state interests. And, in fact, when it adopts a balancing test, the Court usually sides with the state. The Court has held that health authorities may impose serious forms of treatment, such as antipsychotic medication, if the person poses a danger to himself or others. The treatment also must be medically appropriate. (don't make faces -- that's actually rather recent).
The lower courts have used a similar harm-prevention theory and have upheld compulsory physical examination and treatment of persons who have infectious diseases.
So, no -- it is not unconstitutional to impose mandates for vaccines during a pandemic. It's not even a question, and I'm going to be surprised if the Supreme Court hears any of the complaints from anyone on this topic, simply because there is so much precedent on the books.

Other Links and Information

What the Courts have said about School Immunization
The US has a long history of precedent for vaccine mandates
The Surprisingly Strong Precedent for Vaccine Mandates
Can Covid-19 Vaccines be Mandatory in the US?