Stay Away From Our Kids Neville!

October 23, 2014
To Mr. Neville, who already calls himself Senator Neville.

I'm fairly certain that your campaign in and around Jeffco is over. The idea that you would use the very serious, and deeply personal struggles of the kids to bolster your own pathetic political agenda, without even bothering to understand them - is as ludicrous as it is insulting. We are currently putting out as many messages as possible to assure that no parent, kid, teacher or neighbor is tricked by your sham, and that they all know what kind of "Changes" you would bring to our district in the senate. It boggles the mind that someone with the shallowness of thought you have, might have actually been our voice.

Your Sister-Inlaw, Julie Williams, the woman who works on the Jeffco School Board has apparently, publicly endorsed you.
Which is against the law. 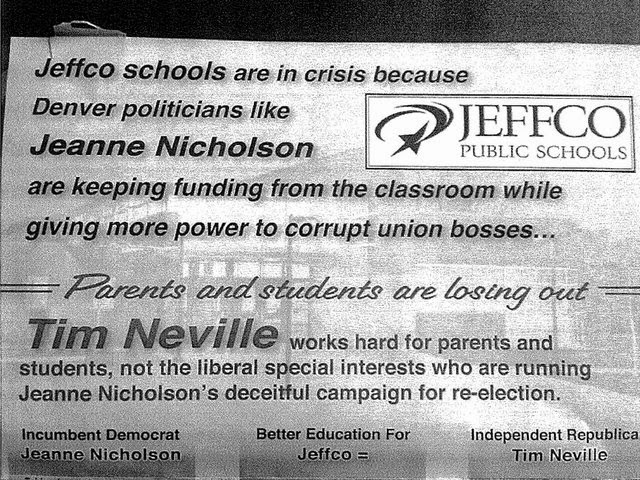 You have used the School Board Logo and pictures of the kids, in a way that implies endorsement.
Which is against the law.

You are saying that you wish to replace Jeanne Nicholson for keeping funding from the classroom while giving power to "corrupt" union bosses. (First off, that is terrible writing)

In the 2011 session of the Colorado General Assembly, Nicholson Vice-chaired the Local Government, and a member of the Appropriations, the Education and the Judiciary Committees.

I can't find a single piece of evidence that she has hampered education in any way, financial or otherwise, nor do I find anything which might suggest any involvement with the unions.

-- Stay Away From Our Kids Nevile.