End of Days Bats. Bill Wants his Money Back -- RANT

October 18, 2014
Obama has had it with your whining too. So, after you are fired, and unable to qualify for unemployment, think about that, alright? Come back when you can read.

COMMON CORE meets EDUCATION REFORM. I love this title.. Sounds fierce doesn't it? Sounds like it is Full of Facts; Hard and Authoritative. However,  it completely ignores the fact that Common Core IS the reform for the law known as ESEA or No Child Left Behnd, imposed by Executive Branch of Federal and State -- which does not, by the way, require your vote or acceptance. CCSS is therefore .. law, for all intents and purpose. (Well done Obama. The hell with those Congress assholes).

That's right. If Obama, Bill Gates, the NGA, CCSSO, David and his crew of Rhode scholars didn't act, starting back in 2009, then last Tuesday, when the ESEA/NCLB came due on it's 12 year mark -- since no school in the whole country passed their AYP -- the action of the law would have fired every teacher in every state, and closed the schools. No school passed. Every school -- Epic Fail

Schools then go under private license. Either sold or contracted. If Koch moves as fast as they are able, they'll be sold. Within six months, every teachers union is shattered. Teachers with plastic smiles and empty heads come to babysit children and tell parents what they want to hear. Salaries plumate -- Teachers become nothing more than glorified babysitters. Since the schools are now private corporations, there is no State oversight and Federal can't move in. Federal Government does not act directly with the schools, so even though the Department of Education is in the Executive Branch, Obama can't help you -- It is against federal law for federal involvement in the local schools.

Oh? You didn't know that? Yes, all of your paranoia about Obama's federal take over of Education, was for nothing, based on nothing, and impossible for it to occur.

The funny thing is, you think I'm joking. This is all well documented, and that narration above is in the No Child Left Behind law.--

If the school's results are repeatedly poor, then steps are taken to improve the school. 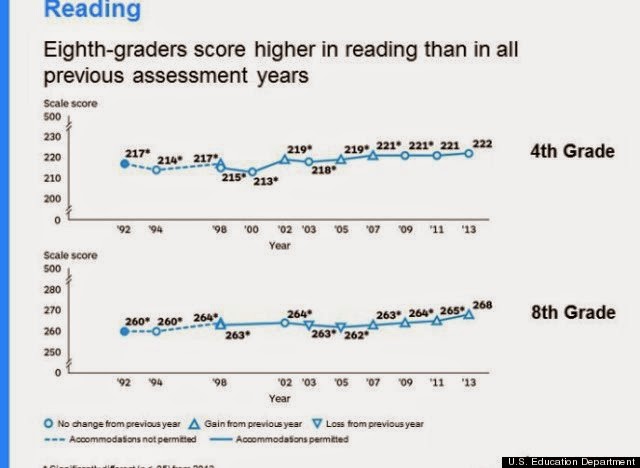 Twelve years and basic reading skills didn't move at all. That is across the nation. Reading skills did not move at all. Now.. Teacher groups like BATs .. well...to say they are mad at Bill Gates is not the whole of it, or as clear as it should be... BATs are the kind of human beings that with only their prejudice and hate to guide them, they physically protest the man. How about that? Apparently none of them (teachers) know how to read deeply, or read critically or do basic research. When given the facts that contradict their story, they feel that their emotional assuredness along with their personal thoughts over ride whatever factual details they are confronted with.

Well, to paraphrase David Coleman, "No one really gives a shit about what you're feeling or thinking."  The man saved your asses and you protest him on matters you know nothing about, and probably wouldn't understand. He put out $200millon for you, with no contract, no deal, no arrangement. If you bothered to check you would know that he has signed an oath with a billionaires club pledging to put half of his total worth into charity.  That comes to just about $25 billion.

Since things like oaths, loyalty, honesty and integrity appear to mean nothing to you, as proven through your actions, you probably won't understand that this oath is important to him... just pointing it out for other readers.

Rumor: Obama went behind the Government's back, He over stepped his bounds and snuck CCSS into the states using coercion on the Governors while Congress was on vacation. With no public overview or vote.

REALITY:  The Dept of Education and the Actions of the ESEA are both firmly under the authority of the Executive Branch. Congress, Senate and everyone else has no authority at all as to how Obama chooses to enforce that law -- but he does have to enforce it however. The verbiage is very clear about the 12 year mark. The consequence of the law states that if there are no reforms, then failure is complete. There is absolutely no flexibility in the ESEA. It is poorly written, horribly conceived and it's amazing teachers lasted this long with it. It should have been rewritten or repealed back in 2008, after Obama's request to Congress to reform, revise or repeal ESEA. 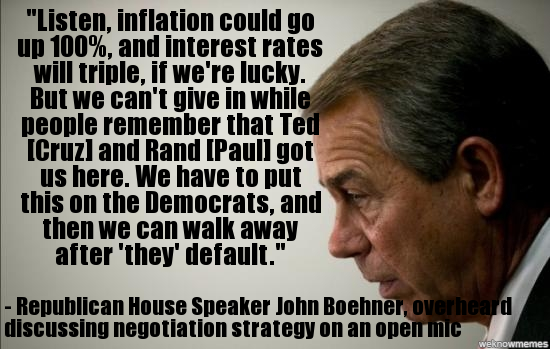 Congress' Answer?   Silence. -- Congress makes no move, and in fact seeks to obstruct Obama in any way they can. They understand that this threatens every teacher across the nation. They just don't care.

They continue to do this up to present day. Their inaction is beyond mere laziness or passive interest. Congress,  since Obama came into office, is a little girl giving Obama the silent treatment.