The story in the Wall Street Journal shows that hundreds of schools are receiving firearms, grenades and combat vehicles from a government program. The 101st Congress in 1990 enacted the National Defense Authorization Act. Section 1208 of the NDAA allowed the Secretary of Defense to “transfer to Federal and State agencies personal property of the Department of Defense, including small arms and ammunition, that the Secretary determines is— (A) suitable for use by such agencies in counter-drug activities; and (B) excess to the needs of the Department of Defense.” It was called the 1208 Program. In 1996, Congress replaced Section 1208 with Section 1033.


The 101st Congress was George Bush Senior days. Both Congresses were Republican controlled with Clinton as president in 1996


The US Department of Homeland Security defines right-wing as hate groups who target racial, ethnic or religious minorities and may be dedicated to a single issue. The phrase is also used to describe support for ethnic nationalism.
"In south Texas, near the Mexican border, the sprawling Edinburg Consolidated Independent School District has 34,700 students and operates its own SWAT team, thanks in part to military gear it was given in recent years.

The department received two Humvees and a cargo truck from the surplus program, as well as a few power generators, said district Police Chief Ricardo Perez. The district applied for weapons, too, but wasn’t given any, so instead purchased its own M-4 and AR-15 assault-style rifles, he said." 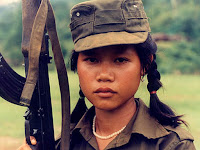 Adding this to the military and religious indoctrination propagated into Texas schools under Rick Perry's ideological beliefs -- it is not a riddle why they would rather spend their education money on assault rifles, instead of books.


Under George Bush Sr.
Books, designed by experts in psychological warfare, were published for the schools of Afhganistan for the purpose of ideological propaganda -- teaching children that radical and extremist ideology is normal and that Jihad was acceptable, even venerated….We come across the following examples in math books:

The primers, which were filled with talk of jihad and featured drawings of guns, bullets, soldiers and mines, have served since then as the Afghan school system’s core curriculum. Even the Taliban used the American-produced books. 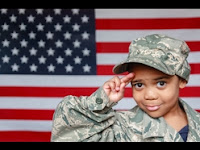 The US History Text and other School Books Designed and Approved by the State School Board of Texas under the approval of Gov Rick Perry have many of the same messages. Historic facts are changed into Religious Text, such as Moses was the First American. That Separation of Church and State as Not the intent of the Founding Fathers -- that this is a Christian Nation and freedom of religion means the choice of Christian beliefs (Baptist, Methodist, Catholic etc) and that the US gave up Slavery Voluntarily

And Texas is not the only Right Wing Governed states who now wish to control education to promote militaristic religious indoctrination. AZ has consistently bucked and fought and even ignored the Constitution of the United States. Their Education System has constantly had to be defended against radical changes.

So, we have Schools buying military rifles and equipped with tanks. We have School books being designed and produced to indoctrinate our children toward the beliefs of a political ideology that the Homeland Security Department sees as a threat -- and the FBI has reported that Right-Wing Violence has increased 400% since 2007