August 07, 2015
Against the Iran Deal? let's say you're right. All of your points absolutely correct. All of them.
After the United States when into Iran and took over their legal and democratic government, we put in charge a dictatorship which ruled up to the 80s by terror and torture. Tens of thousands of people were murdered by the man we put in power.
Then...
We told the world, flat out we will not adhere to the World Court, that we do not see the treaties we signed agreeing to adhere to the Court -- as valid -- and we blocked the UN from enforcing the Court's decisions. Then Reagan admitted to the world his goal was to remove the government of Nicaragua by military action. -- confessing Terrorism.
Reagan NEW YORK TIMES
U.S. encouraged human rights violations

Since 1986 no country has had any resource or avenue of negotiation with us when we are in the wrong. Their only recourse has been terrorism, hostage taking, murder of citizens and attacks on embassies -- and all out war.


This is the first time we have opened up negotiations. with anyone since then. Not peace treaties and crap like that where we've already beaten them down. This is the first time we have been in the wrong and talked with another country, heard their grievances against us, and offered to make good -- or at least 'good enough'. That money we're giving them is in a large part, restitution for damages done.

Closing this down is closing that door again. Which means, more terrorist attacks on embassies, more Americans taken hostage, more angst. Will this solve all of that -- no. But it is a start. People are asking more an more What about the hostages Iran has right now? Well, what about them? They won't talk to us -- we lied to them. We stole from them. And we will not adhere to the World Court. This is the avenue to begin those talks.

We have something like 8000 Patriot missiles. Let that sink in. That is roughly four for every nuke on the planet -- including ours. They're being upgraded right now. Sudai is buying 600 from us right now, and Israel is going to receive 500 I believe.

Let's say your're right -- if you are -- then you are right At this moment. Right now. They won't become crazy -- they are already crazy. If we do nothing, then it's war. Pakistan has nukes, and they like Iran.So it is worse than you thought -- Pakistan has been making noises that it is a 'strong ally of Iran'

So, if you're right we're fucked. There is nothing we can do about it except wait for them to cross the line and then ... glow time. -- if you are not, and we don't do this then whose fault is it? 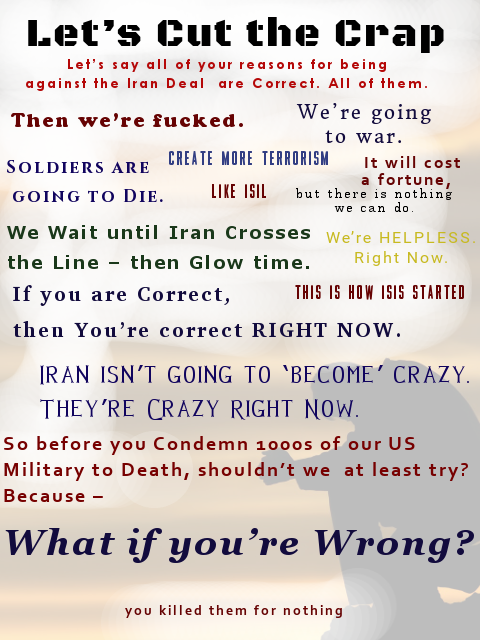