What is the CID?

A sergeant with the U.S. Army was sentenced today to 51 months in prison for accepting bribes from Afghan truck drivers at Forward Operating Base (FOB) Gardez in Afghanistan, in exchange for allowing the drivers to take thousands of gallons of fuel from the base for resale on the black market, announced Assistant Attorney General Leslie R. Caldwell of the Justice Department’s Criminal Division and U.S. Attorney Michael J. Moore of the Middle District of Georgia.

In connection with his guilty plea, Norris admitted that he conspired with other soldiers stationed at FOB Gardez to solicit and accept approximately $2,000 per day from local Afghan truck drivers in exchange for permitting the truck drivers to take thousands of gallons of fuel from the base.  Norris admitted that he was personally paid a total of $100,000 over the course of the conspiracy.


Civilian criminal investigators in CID do not investigate general crimes, but are specialists in areas such as investigating computer system intrusions, polygraphy, operations, sexual assault, investigative policy and major contract procurement fraud. The full performance for all positions is GS-13.
In 1965, the Army took the first step towards centralizing command and control of CID elements. Elements were organized into CID groups corresponding to the Army areas in the United States. The following year, the concept was introduced to units in Europe and the Far East.
This group arrangement did not totally solve identified problems and in September 1969, at the direction of the Army Chief of Staff, the U.S. Army Criminal Investigation Agency was established under the direction of The Provost Marshal General. The agency was to supervise all CID operations and to provide guidance to CID elements around the world.
However, the agency did not have command authority. It was only chartered to provide direction to the criminal investigation effort.
In March 1971, Secretary of Defense Melvin Laird directed the Secretary of the Army to form a CID command with command and control authority over all Army-wide CID assets.

On September 17, 1971, the U.S. Army Criminal Investigation Command was established as a major Army command. The CID Command was vested with command and control of all Army criminal investigation activities and resources worldwide. Granting major command status to the CID facilitated CID communications with all levels of the military and civilian governments while providing a centralized controlling authority over the Army's investigative resources and activities. The Commander of CID is directly responsible to the Chief of Staff of the Army and the Secretary of the Army. The organization of the CID command brought to an end the 50-year-old problem of how to administer the CID.
During its history, CID has undergone considerable change, both in organization and its approach to the problem of detecting and preventing crime. Throughout the changes, however, run the threads of common purpose and principle that link yesterday's years of success by individual CID special agents investigating crime within the Army and today's agents. As the Army's responsibilities have grown and changed, CID has responded to every change by continuing to provide the timely, second-to-none investigative service that has become its trademark. 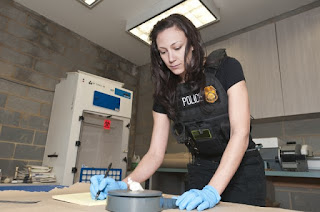 Regardless of the type of crimes investigated by CID, be it counter-narcotic, procurement fraud, property crimes or crimes of violence, CID's performance has invariably been at or above the standards of its nationwide law enforcement agency peers.
Today, the U.S. Army Criminal Investigation Command headquarters is located at Quantico, Virginia. Its position in the Army organization and its location at the seat of national government ensures that CID remains responsive to the Army's needs. It is an organization that has successfully lived up to its motto: Do what has to be done.