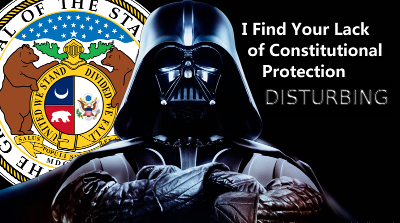 I can't believe I actually thought Missouri's Constitution was a bit soft last night. I've read over its protections from its own government several times now and ... wow. I even posted Washington's as a comparison. -- no comparison.

Which gave me an Idea. I'm going to make a tour of the State Constitutions, and look at their individual protection measures from the Legislation of the State. Citizen Protection from Government Dictatorship are built-in measures most of the state's have in their State Rights. I am told by a fairly reliable source that every state has this written into the constitution, and that it was one of the things every state had to have. Like each state had to have a Blaine Law.

That would be the protection the voters, regular folks have if their State Government suddenly went nuts and decided to do What it Wanted, When it wanted and the Fuck with you Voters because This Place Would Run Much Better With Out You Anyway! -- Like what is happening in Missouri Right now. How would your State Constitution stand up to Traitors in office deciding that your rights as a citizen of your state are getting in their way? I've read quit a few state documents and Missouri hits me as one that is going to be at the top in Citizen Strength for a while.

And... Yeah... why not... That' a Challenge. Post me Your States if you think they'll Stand up to Missouri's - If We find Ourselves at an Impasse, I happen to know a Constitutional Lawyer I could probably get to Solve the Challenge. But I'm rather comfortable with the combination of those four sections. Constitutional Nuke.


As to the Missouri Breach of Trust and Total Failure of Office -- as well as treason against their people ... and no, I don't think I'm over reacting at all. Put it  this way. If they decided to do this on the State's Right to Bare Arms Laws... Think that's a good precedent to set?


The City of Wentzville is not involved in the red light camera lawsuit. Lake St Louis, O’Fallon, Dardenne Prairie and St Peters are the municipalities involved. The link to the article

See... I'm really glad she took the time to write because the news story I read said only three cities were involved.

Great State Of Missouri Constitutional Protection from Rabid Litigation
Known Proudly as the
"Show Me" State, "No Seriously. Show me Wimp! Pull it Out!"

1.010. The common law of England and all statutes and acts of parliament made prior to the fourth year of the reign of James the First, of a general nature, which are not local to that kingdom and not repugnant to or inconsistent with the Constitution of the United States, the constitution of this state, or the statute laws in force for the time being, are the rule of action and decision in this state, any custom or usage to the contrary notwithstanding, but no act of the general assembly or law of this state shall be held to be invalid, or limited in its scope or effect by the courts of this state, for the reason that it is in derogation of, or in conflict with, the common law, or with such statutes or acts of parliament; but all acts of the general assembly, or laws, shall be liberally construed, so as to effectuate the true intent and meaning thereof.