A majority of teachers (68%) who say implementation has started in their school agree it is going well, up six points from 2013. As one teacher noted, “I feel that within my district, efforts are being made to help teachers understand and implement the Common Core State Standards, and I feel comfortable and enjoy learning about new ways to do things.”

When focusing on student outcomes, teachers remain optimistic that the Common Core State Standards will improve:
To that end, many teachers are already seeing a positive impact on their students’ abilities to:
A study done on Common Core A Progress Report on the Common Core by the Brown Center gives good reviews as well. It also shows that the states that didn't move over to Common Core did less well. Not much less, only a "1.27 gap between strong implementers and non-adopters" So, not huge growth in the testing area yet. Which is to be expected, since we are likely using the same curriculum as we were last year and the year before. -- because Common Core doesn't have its own Curriculum. Right? We know that, yes?

Pundits have thrown up all kinds of garbage about Common Core and it is a little depressing how much of it is believed before checking and find out that 80% of the meme's are flat out fiction.

My favorite is the math one: 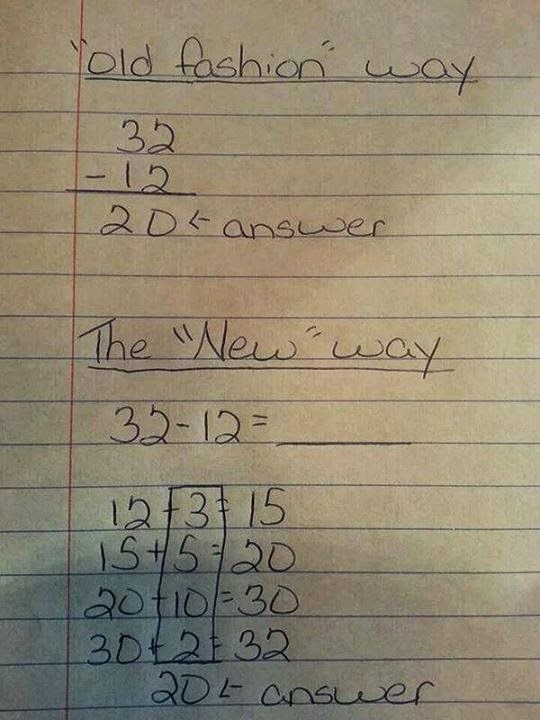 To which anyone n my age group says ARG! Make it STOP! Cause we have no idea about what is going on there. Well First off, that gibberish on the bottom (the new way) really is a way of doing subtraction,  I know,Right? I didn't believe it either, but it is and I'll let this guy explain it on his blog page.

Myth: The standards tell teachers what to teach.
Fact: Teachers know best about what works in the classroom. That is why these standards establish what students need to learn but do not dictate how teachers should teach. Instead, schools and teachers will decide how best to help students reach the standards.

What that means is, the student needs to know how to subtract, and add and read, but you can teach him how to do that anyway you want to.

A pundit (sometimes called a talking head) is a person who offers to mass media their opinion or commentary on a particular subject area (most typically political analysis, the social sciences, technology or sport) on which they are knowledgeable (or can at least appear to be knowledgeable), or considered a scholar in said area. The term has been increasingly applied to popular media personalities. In certain cases, it may be used in a derogatory manner as well, as the political equivalent of ideologue. -- Wikipedia